The Lucas Dolega Award is open to all freelance professional photographers, without age or country restrictions. The participation is free.

It aims to support and accompany photographers with important stories elaborated under risky conditions in order to ensure communication of free and independent information to the public.

The Award aims at rewarding a photographer who, through his or her personal commitment, involvement in the field, as well as the quality of his or her work, will have been able to testify to his or her attachment to the freedom of information.

Participants will have to present a report on the coverage of any event relevant to the defense of freedoms and democracy, a conflict (civil or military wars, riots, attacks or public demonstrations…), a revolution, a natural, ecological or sanitary disaster, and/or their consequences on civil populations.

The Lucas Dolega Award will reward a photographer with a endowment by La Saif of 10.000 Euros, an exhibition in Paris, and a publication in the Reporters without borders album.

Each Participant is allowed to submit several photographic reports up to three reportages. Each photoreportage will have to be completed between November 1st, 2018 and November 24th 2019.

The jury of this eighth edition has awarded spanish photojournalist Javier Arcenillas, for his work about violence in Latin America. 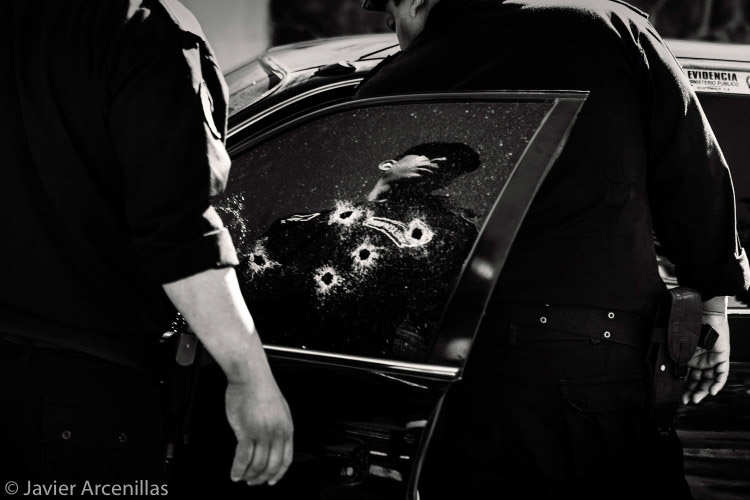 Sociological essay of Central America, the most violent zone in the world in its most dramatic and miserable. The impotence of pain and hell asocial victims of murderers in a daily theater of war where violence is always the news of the day in his red note.

It is very necessary to expose and teach this story to show the true nature of violence because newspapers, television and magazines do not offer current. And that’s too bad because it’s terribly necessary that these stories have a voice in society Central America is considered one of the most violent places in the world. Every day in the streets of cities like San Pedro Sula, Guatemala City, Tegucigalpa, San Salvador and Mexico City, the murders, robberies and violence are increasingly present. The last link in the chain of violence is the grotesque of Narcotourism in Colombia and extreme tourism in America Central that make these territories stained with blood and tears a circus. Ineffective internal politics of the area is unstable, drug trafficking into the U.S. is uncontrollable and unsafe zone of Maras, or control of the Zetas in the border is the closest thing to a daily war.

The report of the Organization of American States notes that in a country such as Honduras violent death occurs every 74 minutes without war there was, in 2012, the most violent nation in the world, totaling 7104 killings documented by police.

In these places the use of youth and children to train as Sicarios is a regular job. They are attracted by the ease of earning money that gives them respect and fear. In the process of training the young killer from the poorest strata of society consumed becoming true heralds of death. Deprotection of these societies for the defense and protection of children in these situations of violence is alarming.