The competition’s goal is to showcase the best in mountain-themed photo essays – to recognize the best stories told through a series of still images.

The jury is seeking a sequence of images that conveys a compelling story or message – with each image strong enough to stand on its own while conveying a greater narrative when viewed in the photographer’s desired sequence.

The winning entry will be awarded a $2000 CAD Grand prize and an opportunity to attend the 2019 Banff Centre Mountain Film and Book Festival.

Each essay submitted is to consist of three (3) to five (5) images.

We suggest photographers include only those images required to tell their story – unnecessary images may reduce the overall impact of submissions.

Please include a short description of the photo essay.

The Afghan Pamir is a high, remote and road-less region at the end of the Wakhan Corridor, where the Afghan Kyrgyz follow a nomadic life, intimately dependent on herds of sheep, yaks and camels for food, transport, fuel and shelter and as trade for other essentials.  In winter, it is a harsh, windswept and mostly monochrome world, brightened by the bright red worn by the women and girls.

Beth Wald is a documentary photographer who creates compelling visual narratives that explore the rich diversity and beauty of natural environments and cultures under threat around the world and tells stories about struggles to save ecosystems, species, ancient knowledge and ways of being, and about our often conflicted relationship with the natural world. She thrives far off the grid, immersed in a place and a culture.  Her work has appeared in National Geographic, Smithsonian, The New York Times, Outside and many others and she has partnered with the Wildlife Conservation Society, Panthera, Tompkins Conservation, and many organizations. She is the recipient of numerous awards, including the Rowell Award and POY. 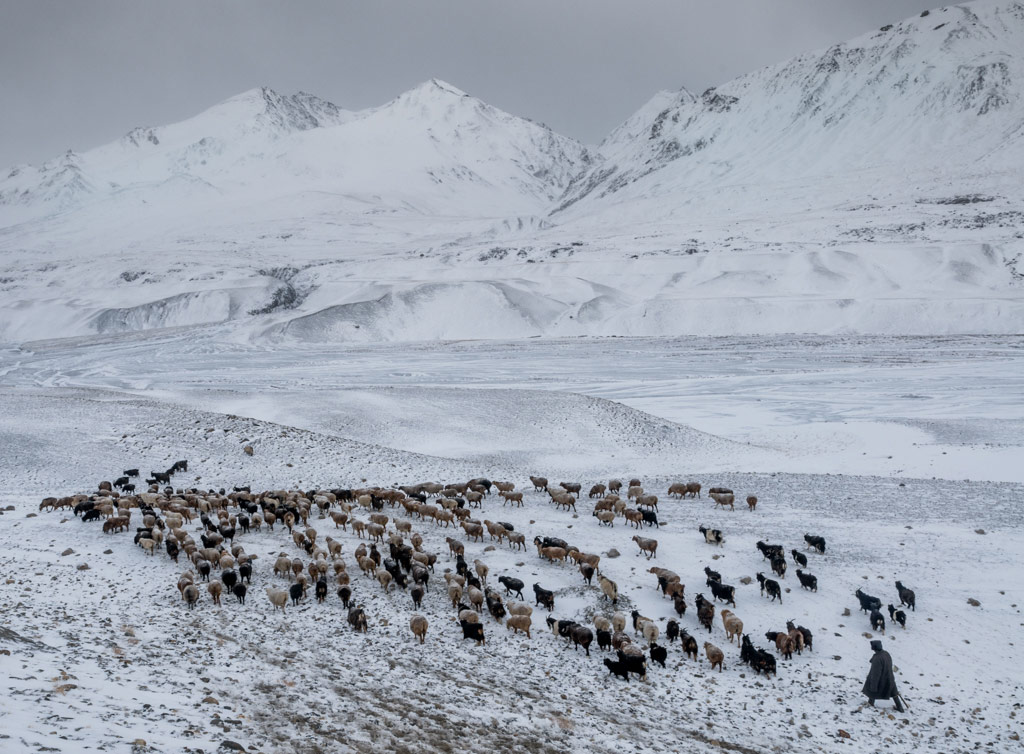 A small population of Kyrgyz live a nomadic life year-round on the high plateau of the Afghan Pamirs, moving seasonally with their herds of yaks, goats, sheep, camels and horse, on which they are completely dependent – for food, clothing, shelter, fuel, and as currency. 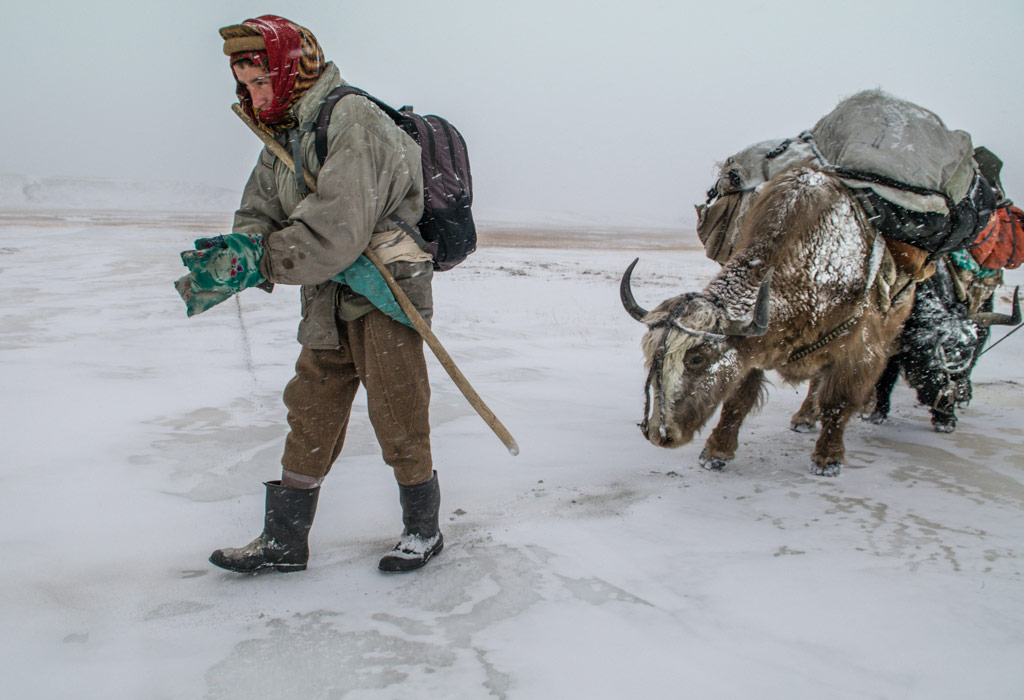 A Wakhi man sprinkles sand on a frozen river so that he and his yak won’t slip on the ice, during a journey up the Wakhan River into the higher regions of the Little Pamir to trade with the Kyrgyz. The Wakhi are thought to be indigenous to the region, which is named for them. 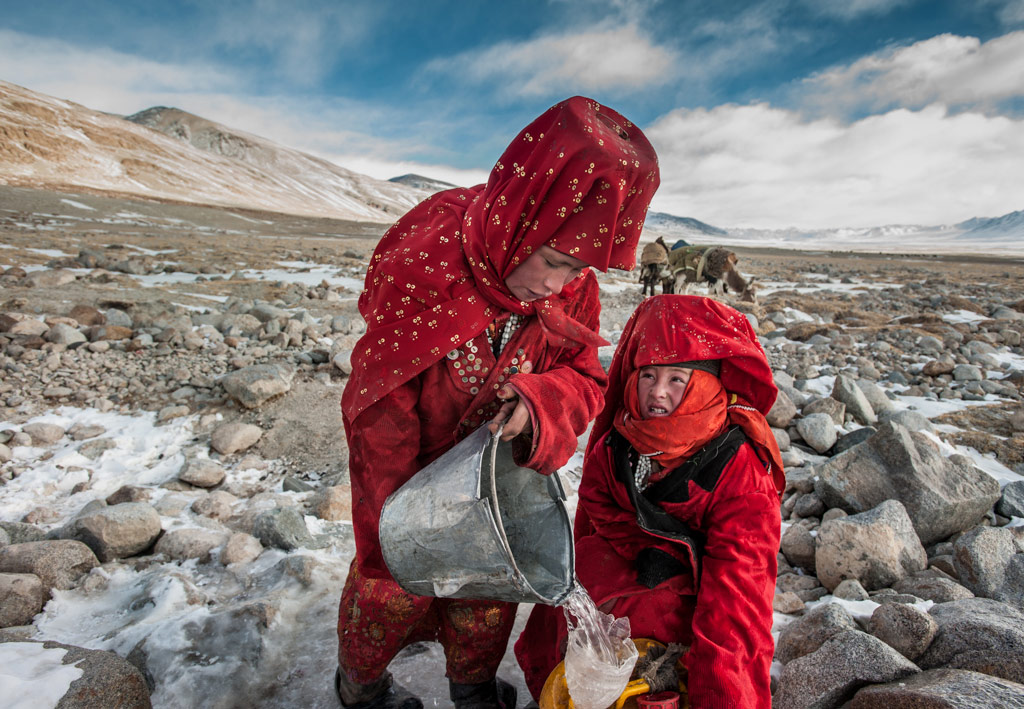 Kyrgyz girls in traditional red robes brave frigid temperatures and icy winds as they fill plastic jugs with water at a stream near their family’s winter camp (4,200 metres), and load them on to their donkeys – a cold but necessary daily outing.  All women and girls wear red; after marrying, the red headdress is replaced with a white one. 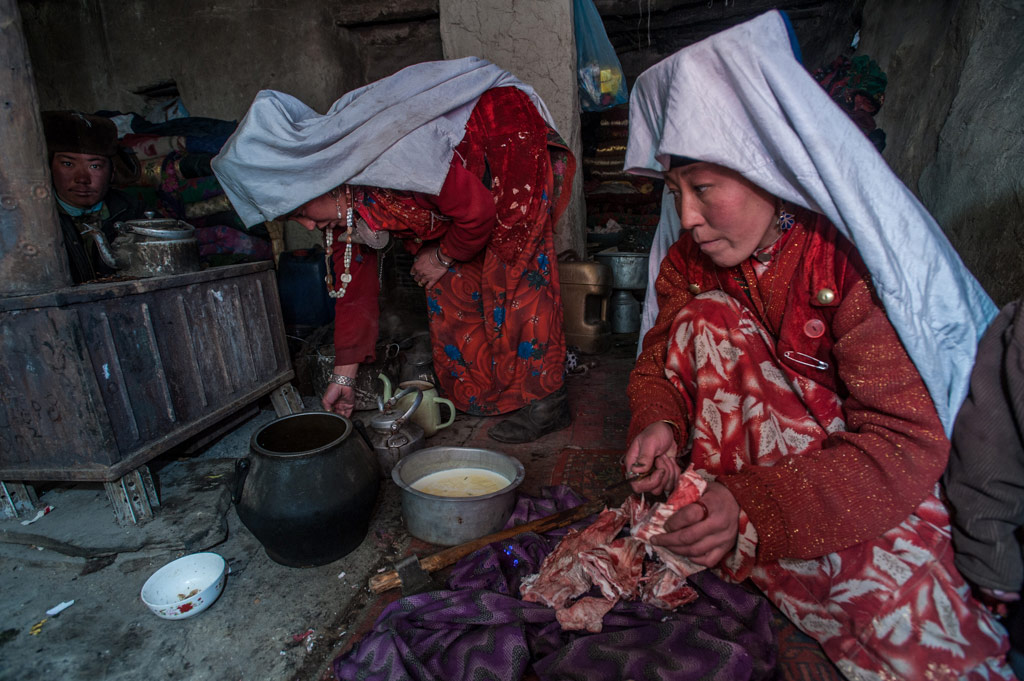 Kyrgyz women prepare a meal of yak meat and bones in a mud hut at their family’s winter camp. For cooking and heat, they rely completely on the dried dung of their animals, as there are no trees in the high valleys of the Pamirs. 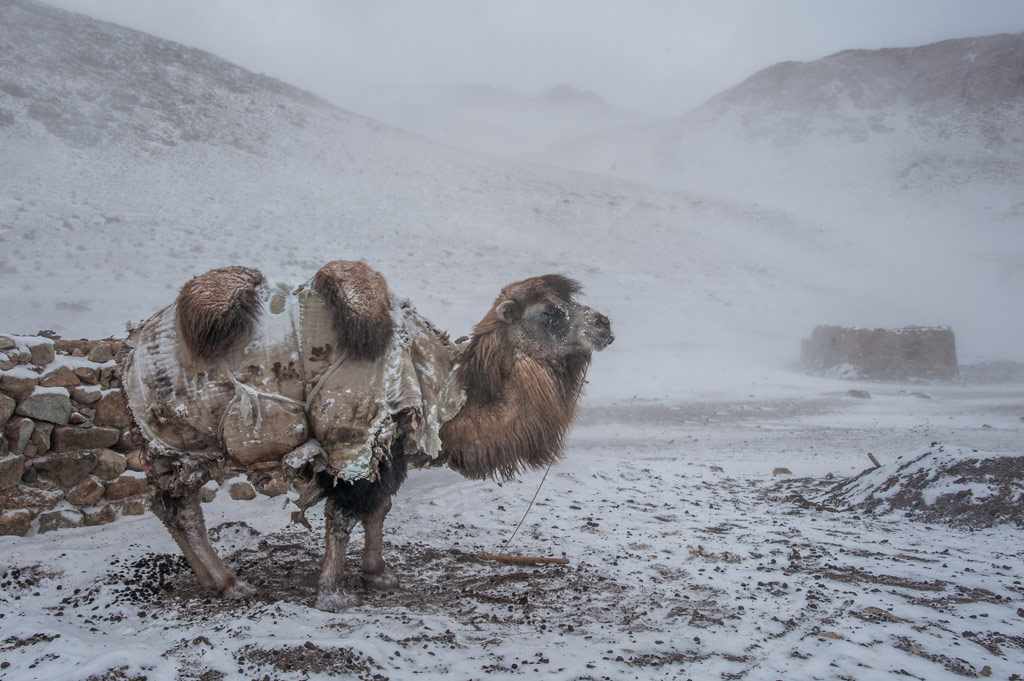 A Bactrian camel stoically braves a snowstorm at a Kyrgyz winter camp.  These woolly, double-humped camels used by the Krygyz are domestic relatives of the wild and critically endangered Bactrian camels of southern China and northern Mongolia.